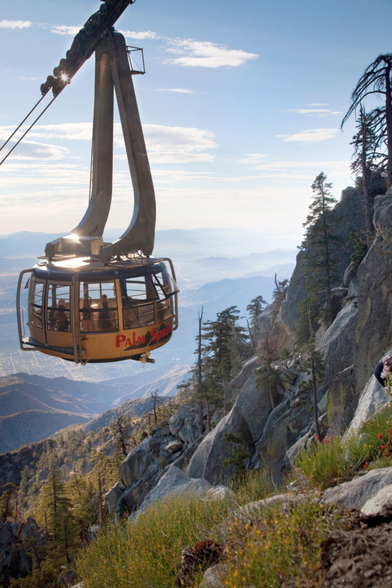 If you want to see Palm Springs “in context”, there is no better way than to hop on board the Palm Springs Aerial Tramway. A 10 minute, 2.5 mile ride that rises to 8,516 feet above the desert floor, the tramway has been operating since 1963 and has thrilled more than 20 million people.
Chiseled into the rugged Chino Canyon at the north end of Palm Springs, the tramway was the dream of Francis Crocker, an electrical engineer by trade who, en route to Banning, California with newspaper publisher Carl Barkow in 1935, looked up from the heat of the desert road to the snow-capped Mount San Jacinto towering above and fantasized about how wonderful it would be to be able to go to the cool.

Crocker took his dream to one of the managers of the Palm Springs Desert Inn, O. Earl Coffman, and, together, they began to develop plans to build the tramway. Requiring government support, the tramway was presented twice to the California State Legislature and was approved both times, but was then vetoed by the Governor. The tramway plans were, again, derailed with the outbreak of World War II.

A new tram bill passed the legislature in 1945, but this time a new governor, Earl Warren, signed the bill creating the infrastructure to allow the tram to be constructed. The entity that was created was the Mount San Jacinto Winter Park Authority and Coffman was its first chairman and Crocker its first secretary.

The design and construction of the tram began in 1950. Deemed by many as the “Eighth Wonder of the World” because of the project’s engineering challenges, the Tramway was designated an historical civil engineering landmark in 1970. No public money was used to build the tram, with more than $8 million raised in private 35-year bonds (all of which was repaid by 1996) and the Valley Station land donated by Culver Nichols.

The Palm Springs Aerial Tramway was completed in 1963 and Francis Crocker, the person who envisioned a way to rise to where “it was nice and cool”, was known to ride the tram and delight fellow passengers with stories about its beginnings. In 1998 the tram began a modernization project that updated the facilities and installed the world’s largest rotating tramcars.

So, when you are wondering what else you might want to do on a beautiful day in Palm Springs, consider taking a breathtaking trip up the side of the majestic Mount San Jacinto. Consider going where it is “nice and cool”… somewhere above it all.
For more information about the Palm Springs Aerial Tramway, visit their website at www.pstramway.com.